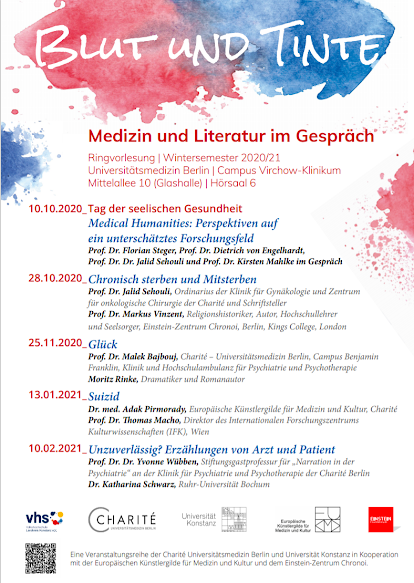 Posted by Professor Markus Vinzent at 14:29 No comments:

Email ThisBlogThis!Share to TwitterShare to FacebookShare to Pinterest
Labels: Medicine and literature

The German broadcaster Deutschlandfunk made a feature on Marcion and the dating of the Gospels, featuring amongst others the work that I have done over the past years:

A slightly longer version will be broadcast on Bayerischer Rundfunk, BR2, on 18 October 2020 at 8.30 am.

Posted by Professor Markus Vinzent at 17:05 No comments:

Posted by Professor Markus Vinzent at 17:02 No comments:

Half of a Scholarly Love Letter to Markus Vinzent; or, Why the Gospel of Mark is Both Early and Late

Here a wonderful contribution to the debate about Marcion

Posted by Professor Markus Vinzent at 16:57 No comments:


[10] Col. 3:3: ‘Mortui enim estis, et vita vestra est abscondita cum Christo in Deo.’ The opening of this homily is lost in all extant manuscripts, and only Ba2 which is close to BT preserves us the opening phrase of n. 2, so it seems that early on, most likely, the homily suffered a mechanical loss in the process of transmission. That Ba2 has preserved slightly more than the rest of the manuscripts, indicates, that the manuscript tradition on which BT relied, can be trusted here with the quote of Col. 3:3 only being preserved in the prints BT and KT, particularly as the homily unpacks this verse with the idea of the ‘vita vestra est abscondita cum Christo in Deo’, so it is most likely that the verse was, indeed, given, even though we do not know the precise wording of the opening of this homily.
[11] Unfortunately, Eckhart’s wordplay of Lebemeister-Lesemeister can not be replicated in English.
[12] Luc. 24:5: ‘Quid quaeritis viventem cum mortuis?’
[13] J. Quint, Die Überlieferung der deutschen Predigten Meister Eckharts textkritisch untersucht (1932), 545 suggests to delete ‘Ein lerer sprichet: ja, richer got, wie wol mir wirt, so min minne fruht gebirt!’ based on his correct view that BT often expands the text of the manuscripts. In this case, however, BT is not only supported by one known manuscript, Ba2, the text also fits the argument, so that the missing of this opening in all other manuscripts is rather due to the potential loss of the opening of the homily which we already noticed with regards to the missing of the core Latin verse and its vernacular translation in all the manuscripts above.
[14] Matth. 27:46: ‘Deus meus, Deus meus, ut quid dereliquisti me?’ It seems that the version that is closer to Eckhart’s thinking is preserved in the B version here.
[15] Ioh. 19:30: ‘Consummatum est.’

[25] See Eckhart, Hom. 29/5,1* [34*; Q 55], n. : ‘Dar umbe stuont Marîâ, daz si deste verrer möhte gesehen umbe sich, ob iendert ein bosche wære, dâ got under verborgen wære, daz si in dâ suochte. Daz ander: si was enbinnen sô gar gerihtet in got mit allen irn kreften; dar umbe stuont si von enbûzen’ (‘Mary was standing in order to see further around her, if somewhere there was a bush under which God was hidden, and to seek Him there. Second: she was internally so truly turned into God with all her powers; therefore, she stood outside’).

Posted by Professor Markus Vinzent at 17:49 No comments: