Her mostly kind words about the 'relatively slim and yet wide-ranging book' set out the thrust of the first two of my chapters (interestingly, almost none of the reviewers comments on the third chapter on liturgy and rituals). It humbles me that she sees my arguments taking 'up a long-lived thesis, which goes back at least to the Tübingen School of the mid-nineteenth century' (559). Although my thoughts were originally developed without looking towards Baur and others, I cannot deny that I have learned enormously from these earlier debates of the matter.

One of the major thesis of Lieu's reading of my monograph is that 'all this is premised on an assumption of chronology, "before Marcion" and "after Marcion"' (558). This is less than partially true. It is true insofar Marcion appears to be the main figure with whom Christianity as a novel concept begins and, as I had indicated only in the 2011 monograph (Lieu rightly states that 'there is little here about the making of the New Testament as such', 557-8), prior to him no Gospel as a combination of oracles and narratives in written form existed. My assumed chronology (before/after Marcion), however, and the dating of (undatable or hardly datable) texts like 1Peter, Barnabas (and we could add some more) are irrelevant for the thesis of the 2011 monograph. Irrespective of when in the second century they were written, they all display that the topic of Christ's Resurrection exclusively appears in texts which either know of Paul, quote him, or are placed in the Pauline tradition. That Marcion who collected Paul's letters and published them, gave the topic of Christ's Resurrection its boost, is the main thing that the monograph wanted to highlight and which does not seem to be rejected in principle.
Let me, however, also address what 'is much to frustrate those acquainted with the period and its problems' (559). Lieu rightly complaints that the monograph 'rarely acknowledges that nearly every text that he [the author] cites carries with it a host of interpretive difficulties'. It was the price of writing a book for a broader readership, and my (first) attempt to avoid the German footnotes. Hence, I am more than happy to provide more footnotes and discussions in my forthcoming book (see below). Indeed, 'assigning Papias to the 140s ... would be heavily contested' (new arguments will be provided and discussed in the below), and so is my denial (voiced, however, also by von Campenhausen and Koester long before) that 'the term "Gospel" with reference to a written document [has been] used before Marcion' (559; that Marcion was the one who created the label 'Gospel' for a written text is now admitted by Lieu herself in her new book, see J. Lieu, Marcion and the Making of a Heretic [Cambridge, 2015], 436: '‘The narrative account of the ministry, death, and resurrection of Jesus most probably was already referred to as “the Gospel”, although that title was not identified exclusively with a particular text in written form; rather, it was he who so labelled the authentic version that he “restored”. The written text with which he was familiar bore a strong resemblance to canonical Luke, particularly as attested within some surviving textual traditions, but likely it was in several respects shorter.’').
My reading of Tertullian, Against Marcion IV 5 'that Marcion himself claimed that his Gospel had been falsified' is disputed, and Lieu believes that this 'reference is undoubtedly to Marcion's claim to have removed the corruptions imposed on Paul's Gospel' (559). Her reference to Adv. Marc. I 20, however, shows that doubts are appropriate. Tertullian, here, states that Marcionites ('they') claim that 'Marcion had not invented a new [rule], but rather refurbished a rule previously debased', by which, as Tertullian shows, they mean 'the corruptions imposed on Paul's Gospel' (so J. Lieu, 559). This is true, but these are 'corruptions' made by those people who had used Marcion's Gospel, as Tertullian explains in Adv. Marc. IV 4.4, when Tertullian claims that his is the true Gospel, Marcion's the falsified, whereas Marcion held the opposite view (although Marcion always saw the Gospel not as his own, but as that of Paul!). Moreover, Tertullian adds to this in the same passage: 'that when Marcion's [Gospel] has emerged later, ours should be taken to have been false before it had from the truth material, and Marcion's be believed to have suffered hostility from ours before it was even published'.
At the latest here it becomes clear that Lieu has to admit that Marcion (or the Marcionites) had claimed that Marcion's Gospel was 'believed to have suffered hostility' from Tertullian's Gospels, hence Marcion did not only wanted to remove 'corruptions imposed on Paul's Gospel', but particularly on that Gospel which was his own and which has suffered corruptions from those Gospels that Tertullian used (Matthew, Luke ...). One may discard Marcion's claim, but one can hardly interpret Tertullian differently here - if he spoke about Paul's Gospel, how can he say that this Gospel 'has emerged later'. He is, indeed, speaking about Marcion's written Gospel which he believed was published after that of the later canonical Gospels. In contrast, Marcion believed the opposite and stated that his Gospel was written earlier than the others and the later canonical ones have taken material from it, the true one, even bevore 'it was even published'. The taking of material by those who produced the later canonical Gospels, then was the reason that Marcion was forced to publish his own Gospel - and, hence, Tertullian is right in this, that this version was, indeed, later than those others.
For this reason, the Marcionites (as in the Adamantius' dialogue I 5) claimed that the Gospels of Matth., Mark, Luke and John were 'spurious'.  It also indicates that Marcionites like Marcion could insist on both the novelty of the new edict in the nova forma sermonis while also being the conservators of tradition. When Marcion claimed that his Gospel had been falsified, he meant of course, the message of the Gospel that he referred back to Paul. The ambiguity does not arise through the modern interpreters but is given by the complex nature of Marcion's understanding of his Gospel.

Just to mention at the end that in due course, the new monograph will be published by Peeters Publishers, Leuven, on Marcion and the Dating of the Synoptic Gospels: 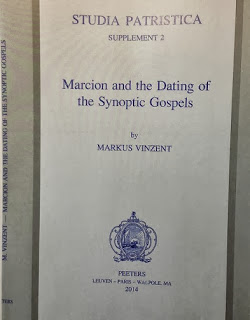 Posted by Professor Markus Vinzent at 09:06