Peeters Publishers release the cover of the new monograph 'The Art of Detachment', the first vol. of the new series 'Eckhart: Texts and Studies'

The release of my new monograph on the Dominican Meister Eckhart is imminent. Today Peeters released the preview of the new book that opens a new series which is going to provide studies and texts (critical editions, English translations and commentaries) of Eckhart's works, some of which have never been translated into English, or the translations of which are hardly available.

The first volume is going to introduce one of Eckhart's core concepts, namely detachment. While this topic has frequently been discussed in relation to human detachment, this monograph opens with a chapter on Divine development and Eckhart's notion of the Divine nature, its transcendentals, the nature of fatherhood, sonship and spiritness. 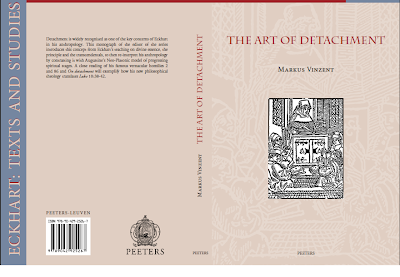 Posted by Professor Markus Vinzent at 20:27

Email ThisBlogThis!Share to TwitterShare to FacebookShare to Pinterest
Labels: Eckhart