The cross on the forehead - a Paulinist novelty introduced by Marcion? 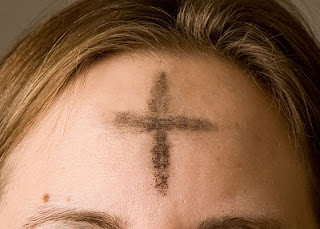 Until now, relatively little has been done to explore Marcionite liturgy. In a forthcoming article I am trying to detect what the sources reveal about this topic. Here just one example, the signing of the baptized with a cross on the forhead:
Tertullian gives us some glimpses about what Marcion's community practiced: one bears, as Tertullian states, ‘the sign on the foreheads’ and the one who is


baptized in water for God is spreading out his hands towards the sky to … God, bows down upon … the soil to a God whose soil it is not.[1]


A little later in the same work Against Marcion (and only in this work), Tertullian explains that the sign on the forehead Marcion uses is the cross and tries to argue that this was not only used since Christ, but already predicted by the Prophet Ezekiel:


The Lord said unto me, Pass through in the midst of the gate in the midst of Jerusalem, and set the mark TAV on the foreheads of the men (Ez. 9:4). For this same letter TAV of the Greeks, which is our T, has the appearance of the cross, which he foresaw we should have on our foreheads in the true and catholic Jerusalem, in which the twenty-first psalm, in the person of Christ himself addressing the Father, prophesies that Christ's brethren, the sons of God, will give glory to God the Father.[2]

Erich Dinkler, following Franz-Joseph Dölger, has commented on Tertullian’s note about the ‘sign on the foreheads’. As according to Rev. 14:1, the sign on the forehead is the name of the Lamb and the Father[3] and in all his works outside his Against Marcion Tertullian does not equate it with the cross, but only states: ‘we are carrying the sign on the forehead’ without mentioning the kind of sign,[4] it becomes likely that, when he comes to talk about the cross as the sign on the forehead, he refers to something that Marcion did in fact not only use, but probably even introduce.
Dinkler has shown that the sign of the cross was already a pagan symbol and sign that marked a property, also used by some Jews as a symbol of salvation and rescue in the future judgement, even a cult signet placed on hands and foreheads before it became used amongst Christians.[5] As the last character of the Hebrew Alphabet, the ת, signified both ‘sign/signet’ and ‘cross’, the cross was used to hint at this last Hebrew character. One of the recurring scriptural reference texts was, indeed, the very same that Tertullian used in his writing against Marcion Ezekiel 9:


9:4 The Lord said to him: ‘Go through the city of Jerusalem and put a mark [תו] on the foreheads of the people who moan and groan over all the abominations practiced in it.’


9:5 While I listened, he said to the others, ‘Go through the city after him and strike people down; do no let your eye pity nor spare anyone! 9:6 Old men, young men, young women, little children, and women – wipe them out! But do not touch anyone who has the mark. Begin at my sanctuary!’ So they began with the elders who were at the front of the temple.


According to Ezekiel, the sign of the תו marks those who resisted atrocities (Ez. 9:9: ‘The sin of the house of Israel and Judah is extremely great; the land is full of murder, and the city is full of corruption’) and will, therefore, be spared by the executors of God’s death sentence. The powerful prophetic text left traces in the Jewish Haggadah and can also be found in the Damascus Document of Qumran were the sign of the cross signifies those who have part in the New Covenant.[6] Dinkler, however, does not see an unmediated connection between this Jewish symbol and the Christan sign of the cross, because he notices the contrast between the old typus and the Christian innovative use of it:


Already the term σταυρός for the cross as an instrument of martyrdom [in Christianity] makes the break with the sign of the Tav obvious. The Greek term σταυρός does not provide any notion which we would normally associate with this word, namely the crossing of two lines or two stems. Rather, σταυρός first only indicates a single stem, the wooden stem, horizontally planted into the ground … Only the use of this stem for capital punishments make the σταυρός to an instrument of torture for the punishment through crucifixion, by putting a horizontal second beam to the horizontal stem, on which the crucified is being bound or to which he is nailed. Therefore, the form of this σταυρός is adequately expressed by the Greek capital letter of Τ.[7]


The Christian symbol of the cross is a novelty that does not build on the Jewish σημείωσις τοῦ θαῦ, but on the Pauline λόγος τοῦ σταυροῦ.[8]


And yet, Dinkler’s explanation gives us the right hints on which to build. As the first reference to the liturgical Christian use is Marcion it is possible and even likely that he introduced this sign to demarcate the break between old and new, precisely what Tertullian contradicted. Marcion seems to have developed Paul’s theology by combining 1Corinthians and 2Corinthians:[9]


1Cor. 1:17 For Christ did not send me to baptize, but to preach the gospel – and not with clever speech, so that the cross of Christ would not become useless. 1:18 For the message about the cross is foolishness to those who are perishing, but to us who are being saved it is the power of God.


2Cor. 1:21 But it is God who establishes us together with you in Christ and who anointed us, 1:22 who also sealed us and gave us the Spirit in our hearts as a down payment.


Paul does not state that we are sealed with the cross, on the contrary to him not Baptism was core, but the preaching of the Gospel. Preaching, however, was making use of the Cross, as the message about the cross (λόγος τοῦ σταυροῦ) ‘is the power of God’.[10] Hence, the abolishing of sins in the water was only the sign of the all-loving God, but the signing of the forehead with the cross was the communal establishing of the anointed ones ‘in Christ’ ‘who also sealed us and gave us the Spirit in our hearts as a down payment’.