Dura-Europos and the Three Women - our earliest Resurrection Iconography? 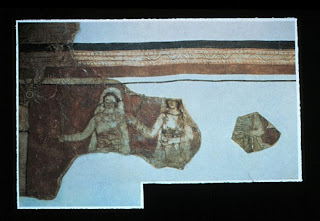 As far as we know, today, we have only one pre-constantinian Christian image of the Resurrection-narrative which also proves that there was no principle hindrance for artists to develop an iconography of the Resurrection. This one depiction dates from the middle of the 3rd century and comes from a rather ‘clumsy’ mural in a house at the cross-road town of Dura-Europos, situated above the right bank of the river Euphrates in Syriac Mesopotamia, on the road to Palmyra, which dates from before the mid 3rd century. ‘Judaism and Christianity were new-comers in Dura. The building that served as a Christian church was not applied to this purpose before the middle of the third century and was very small. The first Jewish synagogue was established a little earlier (about the end of the second century A.D.). This likewise was a very small building, the later synagogue a little larger. It could not accommodate on its benches more than ninety worshippers (men and women; women had separate seats in the later synagogue of Dura). Neither Christians nor Jews had had sufficient time to make many converts or to exert any influence on the religious life of the city.’[1] The house church is not far from the ‘Jewish synagogue, rebuilt by Samuel the archisynagogue and cohen with the assistance of some other Jews, probably rich and influential members of the Jewish community of Dura, in the year A.D. 245’[2] which, too, is covered with mural paintings (although the older synagogue of the early third century does not show figures of living beings). The archaeologist who excavated the site, M. Rostovtzeff from Yale University reports further about the Christian house: ‘In 1931-2 we found under the sloping embankment of the desert wall to the south of the main gate a private house, part of it in excellent preservation, which had been built in the early third century and was transformed very soon, probably about A.D. 232, into a Christian meeting-place and place of worship. One little room was used as a baptistery (some scholars prefer to regard it as a martyrion). Substantial fragments of the plaster coating, decorated with paintings, were found still adhering to the walls of the baptistery.’[3]

Ann Perkins gives a description of the painting and a tentative interpretation: ‘The lower register of the east and north walls apparently formed a single story in two episodes. It begins on the east wall with five women walking towards the left, only their feet and the hems of their long robes preserved. Around the corner on the north wall are two leaves of a half-open door. Beyond it to the left there is space for five women again, although parts of only four have been preserved, again facing or moving towards the left; and the scene closes with a large white sarcophagus. The appearance of the women can be reconstructed from the fragments. They wore long robes and veils covering their heads; the left arm held a bowl or other container against the body at waist-level, while the outstretched right hand held a torch. Bodies and faces are frontal, feet in the profile-and-tiptoe position with the profile pointing left. As in the Good Shepherd scene, visual movement is all in one direction, but here it is more effectively handled, giving the effect of a procession focussed on the great bulk of the sarcophagus at the far end. The scene has been variously interpreted, but the most plausible explanation is the women coming to the sepulchre on Easter morning. On the east wall they approach the tomb, suggested by the half-open door’,[1] the tomb has ‘a gabled top. No other figures are in sight, but two stars.’[2] Beyond this scene, on the north wall the women are depicted being ‘inside the tomb (hence the lighted torches, which the women outside probably did not carry), coming towards the sarcophagus. The background colours corroborate this interpretation, the outdoor portion having a white ground and the interior portion a dark-red one … The details of the representation do not fit the story of any single gospel; there may have been a deliberate attempt to harmonize the varying accounts here, since the other pointings in the room show reasonable verisimilitude. The episodic treatment of narrative with repetition of figures to indicate different “scenes” has a long history in Near Eastern art.’[3]
[1] A. Perkins, The Art of Dura-Europos (1973), 53.
[2] R. Milburn, Early Christian Art and Architecture (1988), 12.
[3] A. Perkins, The Art of Dura-Europos (1973), 53f.
[1] M. Rostovtzeff, Dura-Europos and its Art (1938), 61f.
[2] M. Rostovtzeff, Dura-Europos and its Art (1938), 101.
[3] M. Rostovtzeff, Dura-Europos and its Art (1938), 100f.
Posted by Professor Markus Vinzent at 17:41