So far the biggest discovery in my academic life happened early last year. Having gone through all the older research literature and published sources on Meister Eckhart, when finishing off my forthcoming monograph The Art of Detachment, a book on Eckhart's philosophical theology (to come out in the next weeks with Peeters, Leuven as vol. 1 of a new series Eckhart: Texts and Studies), I also read through texts which M. Grabmann and A. Dondaine had published in 1927/1936 but classified as 'dubious' in authorship. And, yet, I saw a clear parallel between these Parisian Questions, Eckhart's Latin Sermon XXVIII and his Commentary on Exodus. This electrifying discovery of four more Parisian Questions, I presented in an evening lecture at the Leeds International Medieval Congress in 2010, and, since then, has been tested with regards to content, language and codicology by myself and colleagues (Loris Sturlese, Walter Senner), and we all agree on the authenticity of these Questions, here the page of cod. Vat. lat. 1086 222v and the titles of the Questions (a translation will follow soon here on the blog):

1) ‘Does the omnipotence which is in God need to be considered as absolute power or as directed power?’[1]
2) ‘Is the essence of God more real than the property?’[2]
3) ‘Whether diversity is a real or an intellectual relation?’[3]
4) ‘Whether the difference with regards to the intellect is prior to the difference with regards to the thing?’[4]
Moreover, after Pater Walter Senner had listened to my findings which I first indicated to the public in a lecture of the Meister Eckhart Gesellschaft in Munich in April 2010, he pointed me to one of his own very recent discoveries, a reportation of another hitherto unknown Parisian Question of Eckhart, found in the lower margins of a codex of the French library in Troyes  Ms. 269: 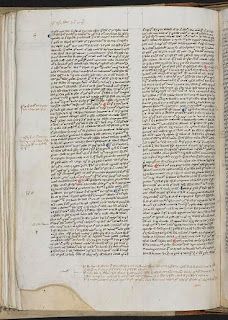 The lower margins clearly show the entry of a quaestio introduced by Eckhart's name:

Here the transliteration (P. Senner) and my own English translation:


Eckhart:
Next, to whatever has been created or produced, another can be produced, a non-being, even if that (what) might be produced has a reason to be. But the power of God extends itself on all being and all non-being, because <anything contrary> would be neither being nor non-being, because man would be non-man, and non-man would be man. One will ask etc.
Next, if to any finite thing is added another finite thing, the total would be finite, but never infinite. But everything created and everything createable is finite. Therefore etc. Therefore, it follows even more from the fact that something moves into infiniteness, that it will never be really infinite, because if it were infinite, it could not further proceed into infiniteness.
Next, according to Anselm, God alone is the one who cannot be thought bigger. Therefore to every given created thing something greater can be thought of. But God can do more than any creature <can> think of. One will ask etc.
Further literature:
[1] ‘Utrum omnipotentia quae est in Deo debeat attendi secundum potentiam absolutam vel secundum potentiam ordinatam’ (fol. 222v).
[2] ‘Utrum essentia Dei est actualior quam proprietas’ (fol. 222v-223r).
[3] ‘Utrum diversitas esset relatio vel rationis’ (fol. 223r-223v).
[4] ‘Utrum differentia secundum rationem sit prior quam differentia secundum rem’ (fol. 223v-224r).
[5] Can no longer be clearly identified.
[6] Anselm of Canterbury, Proslogion c. 2-3: Opera omnia, ed. Francisus S. Schmitt, vol. I (Seckau, 1938, repr. Edinburgh, 1946), 101-3.
Posted by Professor Markus Vinzent at 08:23

Email ThisBlogThis!Share to TwitterShare to FacebookShare to Pinterest
Labels: Eckhart