For a long time, scholars have seen that the woes correspond exactly with the beatitudes, and pointed to the fact that also that in other writings beatitudes and woes were often grouped together, although never matching each other exactly in the way that they do in the present pericope.[1] Just to give one example:
In Isa. 3:10-1, for example, we read:
3:10 Tell the innocent it will go well with them,
for they will be rewarded for what they have done.
3:11 Too bad for the wicked sinners!
For they will get exactly what they deserve.
With Marcion’s interlinking structure missing, the blessings and woes, however, do not lead to the paradoxical nature which we will find present in Marcion. Hence, let us look more indepth into the nature and structure of the latter: 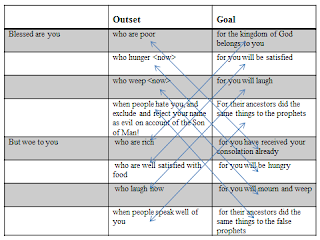 It is astonishing that after those comparisons of Jewish writings with the blessings and woes in Luke, perhaps because of the inserted verse of Luke 6:23a which is not attested for Marcion’s Gospel and somehow disturbs the interlinking complementary structure of the combination, scholars in the past have not necessarily seen that in Luke the two sections of the blessings and the woes have to be read together. On the contrary, it was claimed that the audience of the beatitudes must have been a different one from that of the woes; and it was stated that both entities had ‘originally – seen from the history of traditions – nothing to do with each other’.[1]

Synoptic Stemmata: Streeter vs. my own 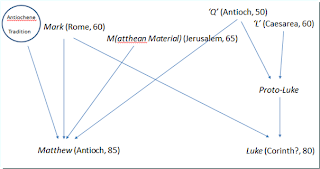 And my own suggestion with Marcion's Gospel as outset:

Posted by Professor Markus Vinzent at 23:12 No comments:

It concerns a fully-paid doctoral position at VU University Amsterdam (4 years), supervised by Prof. Paul van Geest and Prof. Hagit Amirav. In principle, there are no teaching and course work obligations involved.
Please follow the link:
http://www.vu.nl/nl/Images/1.2011.00162_tcm9-222709.pdf
Posted by Professor Markus Vinzent at 15:52 No comments:

Email ThisBlogThis!Share to TwitterShare to FacebookShare to Pinterest
Labels: openings

The bookflyer has appeared:
This is the first Patristic book to focus on the development of the belief
in the Resurrection of Christ through the first centuries A.D.
By Paul, Christ’s Resurrection is regarded as the basis of Christian
hope. In the fourth century it becomes a central Christian tenet. But
what about the discrepancy in the first three centuries? Vinzent offers
an eye-opening experience with insights into the craftsmanship of
early Christianity – the earliest existential debates about life and
death, death and life – all centred on the cross, on suffering, enduring
and sacrifice.
To order, please visit:
www.ashgate.com
All online orders receive a discount
Alternatively, contact our distributor:
Bookpoint Ltd, Ashgate Publishing Direct Sales,
130 Milton Park, Abingdon, Oxon, OX14 4SB, UK
Tel: +44 (0)1235 827730 Fax: +44 (0)1235 400454
Email: ashgate@bookpoint.co.uk
August 2011
282 pages
Hardback
978-1-4094-1791-0
£60.00
Paperback
978-1-4094-1792-7
£19.99
Christ’s Resurrection in
Early Christianity
and the Making of the New Testament
Markus Vinzent
, King’s College London UK
‘Professor Vinzent takes the reader on a fascinating journey through virtually every Christian text from the
first two centuries in order to demonstrate the validity of his thesis. His judgments…are based on a
thorough reading of the evidence. This book constitutes a great achievement to which I am sure I shall have
frequent recourse.’
– Gerd Lüdemann, Georg-August-University Göttingen, Germany
‘Potentially revolutionary, utterly controversial, and endlessly fascinating, this book … raises as many
questions about the contours of early Christianity and the emergence of the canon as it seeks to answer. It
will surely spark scholarly debate and discussion for years to come. No serious scholar of early Christianity
can ignore it.’
– Mark DelCogliano, University of St. Thomas, St. Paul, Minnesota , USA
‘Markus Vinzent’s new monograph tackles head-on the grossly undertreated historical problem of the dearth
of literary expositions and artistic representations of the resurrection of Jesus in pre-Nicene Christianity…
Vinzent’s study exposes how the passion of Christ, for a sustained period, dominated early Christian
soteriology in its doctrinal and liturgical manifestations. This book will significantly aid in revising historical
reconstructions of Christian identity in its formative stages in antiquity.’
– Paul M. Blowers, Emmanuel Christian Seminary, Johnson City, USA
Sample pages for published titles are available to view online at: www.ashgate.com
Contents:
the end; Paul and the Resurrection rediscovered; Celebrating life and
death; Bibliography; Index.
Introduction: a rise of the risen Christ?; The beginnings of
Now available from Ashgate Publishing…
Posted by Professor Markus Vinzent at 14:40 2 comments:

The Gospel of the Hebrews and Marcion's Gospel

Marcion's Healing of the Leper

Dear Stephan,
your comments are anything but time consuming, on the contrary - it needs queer thinking in a field which is so cluttered with apology and for all of us so remote through sheer hundreds of years of apologetic distortion. Whether to trust a source, never any trust, but detective eyes. Alliance to institutions? None, sheer looking for understanding. Which is difficult enough. Now what you write about the Creator and the Cross is highly interesting, to deep for me to come up with a short answer. I don't have one, yet. From Marcion's Gospel which I am about to restore at best as I can and the sources allow, I am impressed, how intelligent and lucid it is, perhaps the most thought through of all, except John, but certainly better thought through than Mark or even Matthew, and Luke seems often simply helpless how to deal with it. Extraordinary to see that nobody had attempted a comparative reading of Marcion's Gospel with the others. Let me come back to the destruction of the temple. I have not come to the temple, yet, but I was struck by the pericope on which I am working now (known as the Healing of the Leper, but characterized by Marcion as the story of the companion in misery and hatred), where Marcion says that the Lord asked the healed to present himself to the priest and bring the offering for his cleansing, 'as Moses commanded, that it may be for a testimony to them'. Isn't that astonishing? Even Tertullian is struck. But he is even more struck (and argues, of course, against it) that Marcion's reason for stating this is that he contrasts Christ's God with that of Elisha who's servant is less than the master himself. Different with Christ's God - Christ has the same standing as God, there is no hierarchy between him and God. This Christ is of the same gentleness and clemency as God himself. That is why he even accepts that the one who is healed can carry on with his customary duty, note: his Jewish duty, commanded by Mose! What I like with your speculative thinking (and what could we achieve without in these difficult fields), is its creativity, based on and corrected by evidence. Let us see what the further reading of Marcion's Gospel will reveal. Already now, I have learned so much, and I am sure, this text will tell us more about him.
Posted by Professor Markus Vinzent at 15:54 5 comments: