Manifesto on how to write early Christian history

Triggered by Roberto Alciati who (together with Laura Carnevale) has discussed my book "Writing the History of Early Christianity" (CUP, 2019) in ASE 37 (2020), 547-573 and extracted from it a first list of salient points from it, putting it into a manifesto, in my forthcoming response to him (ASE 2021), I have attempted to reformulate this list as follows:

(1) Anachronism, inbuilt into any historical exegesis, points us into

the direction, into which our reasoning moves, and makes us realize

from where we start.

(2) Every scholar starts with her or his preconceived paradigms,

hence, the realisation of these paradigms does not remove them, but

allows to know the partial, if not limited nature and scope of one’s own

insights which creates space for other, even competing and contradicting

views and opinions. Instead of an attempt of constant widening one’s

scope and reach, it is an admittance of a never attainable truth or, in

positive terms, of truth that is open for responsible reformulations.

(3) Using categories alien to the period in question is necessary,

though they should be critically conceptualised and defined, particularly

(4) Doing and writing history is as important as reflecting on historiography,

preliminarily outlined assumptions, but as coflexions.

(5) Doing and writing history is more about the ‘how’ things happen,

rather then when and what happened. Facts per se explain little, if the

little facts we can still know are not explained.

(6) Facts, material and objects of the past or, what sometimes emphatically

or unreflectedly is called ‘evidence’ is, as the name states,

‘made by humans,’ first by scholars who unearth them before they can

be searched for what they may have been. At the same time facts and

material of the past are targets, often unruly and objecting stumbling

blocks for forgers. There is rarely something both more similar and

more different than facts and fakes. The first, be it made by scholars,

be it produced by the past, thrives for what is special, individual, uncommon,

the second, be it made by contemporaries or past people is

done with the intention of imitation, replication, fitting in or deviance. A

search for the specific will help to come closer to facts and expose fakes.

hence is geared to expose fakes and replace ideologies and

teleologies with suggestions, though these need not be only cautious

ones, but could also be firm ones, yet open to substantiated criticism.

(8) There is no hierarchy between primary sources and secondary

literature, but retrospective historiography suggests the study and the

targeting simply of objects and facts. In an anachronological approach

the more recent ones and in a critical, systematic study the more impacting

objects have to be dealt with first.

(9) In retrospection, we aim at understanding individuals rather than

groups of people or abstract entities.

(10) ‘Realia’ are taken and highlighted as props in the recreation

of the past, instead of providing the basis for an understanding of the

process through which we see the past, they are the outcome of such

Posted by Professor Markus Vinzent at 09:59 No comments: 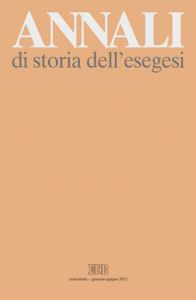 you find the contributions by Laura Carnevale and Roberto Alciati: Discussion of the Book of Markus Vinzent, Writing the History of Early Christianity. From Reception to Retrospection (Cambridge: Cambridge University Press, 2019)
I am most grateful for these critical readings of my book and have been invited to reply to their contributions by publishing an answer in this year's issue of ASE.
Posted by Professor Markus Vinzent at 09:38 No comments: