My book chapter on "Christianity": a response to Roman-Jewish conflict appeared as part of 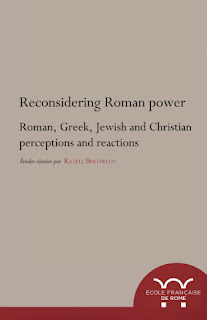 Abstract:
The beginning of Christianity is often associated with biblical protagonists (Jesus, Paul, the Apostles etc.) and often linked to historical events taking place around the mid-1st century. This article takes a different view, beginning with the assumption that what was later called "Christianity" should not be anachronistically projected back onto the first century. Even though it built on gradual developments taking place over the course of 140 years, "Christianity" was a novel concept, no older than the end of the Bar Kokhba revolt (135 CE). As most of the early "Christian" writings cannot be dated with certainty, we do not know whether Jews started calling themselves "Christians" prior to this time. The first texts to report such self-descriptions are Marcion’s Antitheses from around the year 144 CE and Ignatius’ Letters (middle recension) which together, and supported by growing scholarship, I take to be from after the mid second century. Before this point, "Christian" texts describe the word as a deprecating exonym (Acts 26:28 attributes use of the term to a cynical Agrippa; 1 Peter 4:16 associates "Christian" with suffering and shame). In what follows I hope to show why and how Marcion created "Christianity" as a label for a third way between Jerusalem and Rome, an innovation which proved successful and was quickly picked up by a number of "apologists" in the late years of Hadrian and the early years of Antoninus Pius.

For more, see here
Posted by Professor Markus Vinzent at 18:53 No comments: