The two recensions and editions of Marcion's Gospel

Tertullian reports in his polemic against Marcion's Gospel how Marcion himself complaint about those who must have nicked his text, plagiarised and published it, even before he himself could do so:


How absurd it would be that when we have proved ours the older, and that Marcion's has emerged later, ours should be taken to have been false before it had from the truth material, and Marcion's be believed to have suffered plagiarism through ours [Luke, or Matthew] before it [= Marcion’s] was even published:[1]
This most important information of Tertullian has so far, if I am not mistaken, never been picked up by any scholar: Tertullian reports that Marcion – apparently still in his Antitheses – did explain that Luke (or is Tertullian referring this to Matthew?) was ‘plagiarism’ (aemulatio) of his own Gospel, and, even more importantly, that this plagiarism occurred even before Marcion had edited and published (editum) his own Gospel – which he seems to have done in conjunction with the Antitheses in which he drew attention to the unauthorised publication of the appropriated, interpolated and judaized version of his own Gospel.
From this information we have to draw that we are dealing not with only one version of Marcion’s Gospel, but with two different editions and possibly recensions!
The first was the unauthorised version of the Gospel which ‘suffered plagiarism’, must have gone out of the circle in which Marcion had distributed it, it was copied and altered. The text of this edition/recension which was obviously only intended for internal use, a so-called 'memorandum' or 'apomnemoneuma' can no longer be retrieved.
The second recension, the edition of which was undertaken by Marcion himself. In this Marcion responded already critically to the plagiarised version of his first edition, hence took notice of and potentially may have also revised his previous recension. Calling the altered version a ‘copy’, Marcion certainly acknowledged that the plagiarised product was based on his own, older text. The reason for himself to formally publish his own version, was of course the challenge by the plagiarised version. And in order to defend his own product, he added first the Antitheses and combined the Gospel with the ten Pauline letters, certainly not, as we can learn from this process, because he wanted to evangelize the world – and he certainly had never dreamt that his initial work would be further copied and eventually lead to the fourfold New Testament (and to harmonizations of it). Instead, his publication was a direct reaction against the case of plagiarism in self-defense. When Geoffrey M. Hahneman in his book on the Canon Muratori states that ‘Marcion’s basic intent appears to have been to recover a lost tradition’, we can certainly agree, but the quoted text of Tertullian goes against his further view that ‘there is no direct evidence that Marcion knew or excluded other gospels. So far as is known, Marcion never polemized against the other gospel traditions.’[2] Although we are not aware that Marcion knew of more than the one plagiarism, we do not know whether he is talking about Luke (it could also be Matthew, as Tertullian calles the latter often ‘our’ Gospel) or another version. Having said that Marcion, according to the above quote, was highly critical of the copy made of his Gospel, to the extent that he wrote his Antitheses and published his New Testament, the question still needs to be answered whether Marcion intentionally excluded other writings, as Tertullian claims (disallowing Rev., 1-2Tim., Tit.[3]), and thought of his New Testament as a ‘closed’ collection. If, what would need further research, later Marcionites altered and broadened Marcion’s text, we may have to do with a collection that was meant to be ‘specific’ but not ‘fixed’.[4]
As Tertullian begins his own commentary of Marcion’s Gospel with reference to Marcion’s Antitheses which Marcion has added to the second recension, his publication of the Gospel, he had only knowledge of this second recension.
[1] Tert., Adv. Marc. IV 4,2: ‘Alioquin quam absurdum, ut, si nostrum antiquius probaverimus, Marcionis vero posterius, et nostrum ante videatur falsum quam habuerit de veritate materiam, et Marcionis ante credatur aemulationem a nostro expertum quam et editum.’
[2] G.M. Hahneman, The Muratorian Fragment (1992), 91.
[3] See Tert., Adv. Marc. IV 5,2; V 21.
[4] This differentiation in G.M. Hahneman, The Muratorian Fragment (1992), 91f. (ibid. more about later Marcionites).
Posted by Professor Markus Vinzent at 04:54 3 comments:

Forgiveness of sins in Baptism - irrespective of repentance

Email ThisBlogThis!Share to TwitterShare to FacebookShare to Pinterest
Labels: Marcion

The publishers kindly sent me through a review that was published in 'Church Times' on 2 December 2011: 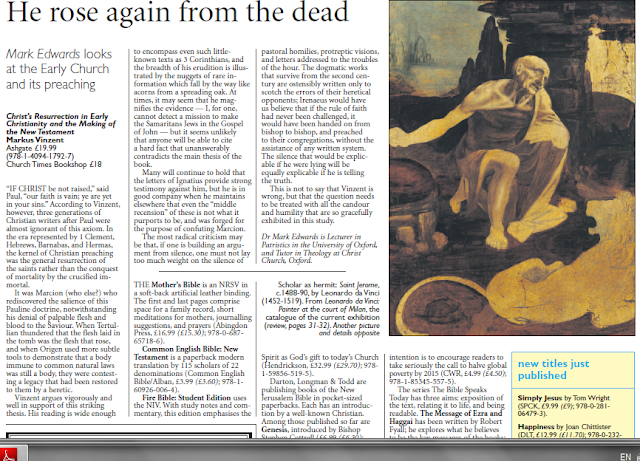 Mark Edward picks up the question of the 'argumentum e silencio', on which I entirely agree. And he is absolutely right, silence can mean both that people believed or did not believe in the Resurrection. To assume, therefore, as a principle that they did believe in the Resurrection right from the start, as hundreds of years of scholarship and schoolbooks let us know, is therefore not the only true option. The other has not been seen yet, and therefore, is being tried out here in this book.
Now, if we have two potential options - it comes down to, how to way the arguments. As I admit in the book, sheer silence (especially in homiletic literature) could mean both, but the interesting element which is not highlighted in the review is that all the many texts that are dealt with in this book do talk about salvation, talk about incarnation, talk about death and sacrifice and that these are the salvific acts of Christ. Moreover, as I show in chapter 3 - Easter, Baptism and Sunday have been centered around Christ's death, so that, for example, up until the end of the second century there was only one unanimous definition for Easter, namely the celebration of Christ's death. Does this not let the pendulum swing towards the proposed solution?
Posted by Professor Markus Vinzent at 17:56 No comments:

Email ThisBlogThis!Share to TwitterShare to FacebookShare to Pinterest
Labels: Resurrection

Summary of Markus Vinzent’s paper
by Susannah Ticciasi, King's College
In his paper, Markus offers an account of Meister Eckhart’s innovative Trinitarian theology, showing quite how radical and challenging it is in relation to the tradition, claiming that it ‘destroys a whole system of inherited philosophical theology’. He also indicates the profound ramifications it has for the place of creation in relationship with God.
As Markus shows, Eckhart’s key innovation is to locate the divine potential for generating and being generated, not in the divine Persons, but in the divine essence. This allows the Persons to share even more than they are traditionally conceived to share, since the Father (not generating through his personal properties but through the divine essence) is able to pass on to the Son even the potential to generate. Thus, generativity is a property of transcendental divine essence. Moreover, once the ground of God is reconceived in this way, Eckhart claims that it is more properly named mother than father, since it is a mother’s work to conceive. Motherhood precedes and grounds fatherhood within the Godhead, even in respect of the person of the Father, who conceives the Word. Indeed, as Markus puts it, ‘motherhood, therefore, is a description of the transcen­dentality of divine essence which allows for fatherhood, sonship, spiritness and creation’. The concept of fatherhood has a more delimited appropriateness in relation to the Father’s activity as expressed in the Son, which is an intellectual work.
The consequence of this rethinking of the divine essence is that it is no longer understood to contain differentiation, but rather is pure potentiality: God’s maternal nature is ‘detachment’. However, this also has far-reaching implications for creation, since God’s potentiality for fatherhood, sonship and spiritness is no longer any different from God’s potentiality for creation. It now becomes clear why Markus began his paper with an account of creation as, like God, ‘beyond eternity’. God is no longer to be opposed to creation as the eternal to the temporal, since creation is invited fully to share in God’s life.
The question this leaves me with is whether distinction between God and creation is nevertheless maintained, as one might infer from Eckhart’s phrase, ‘God is distinct by virtue of being indistinct’. And Markus himself claims that Eckhart does not want to confound God and creation. Such a question, as well as many others which are raised by this fascinating and provocative paper, are a compelling invitation to read the book, just published, whose first chapter is a version of Markus’ paper:
Markus Vinzent, The Art of Detachment (Eckhart: Texts and Studies, Volume 1; Peeters, 2011).
Posted by Professor Markus Vinzent at 19:43 No comments: