Papyrus Egerton 2 / P. Köln 255, The Gospel of Peter and Marcion

Reading the book by Francis Watson, Gospel Writing (Grand Rapids, Cambridge, 2013), and working on the commentary on Marcion's Gospel (and the reconstruction of its text), especially the two passages on the healing of the leper (par. Luke 5:12-4) and the question of  whether one should pay tax to the king (par. Luke 20:20-6), I noticed that the 'unknown gospel', preserved in the fragments of Papyrus Egerton 2/P. Köln 255, displays the same synoptic feature which I have found with regards to the relation between the Gospel of Peter, the canonical gospels and Marcion (see the previous post on this).


Hence when Francis Watson in his mentioned study states that a ‘comparison of the Markan version with Matthew 8.1-4 and Luke 5.12-16 does not produce any significant findings in relation to GEger [= Papyrus Egerton 2/P. Köln 255]’,[1] a closer look at the nature of what these papyri preserved us, indeed, sheds further light on the relation between our early Christian gospels. 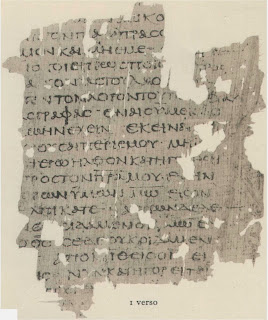 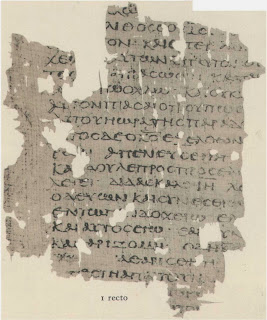 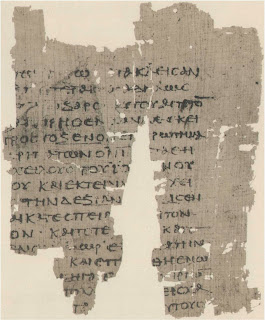 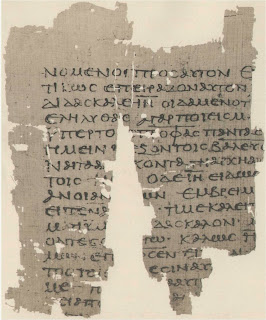 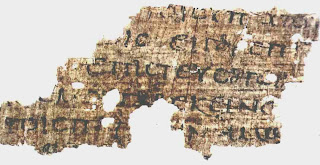 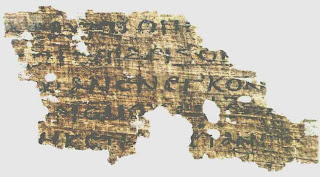 Fragment 1 Recto
[...] and taking up stones together to stone him. And the rulers laid their hands upon him to seize him and hand him over to the crowd. And they could not take him because the hour of his arrest had not yet come. But the Lord himself, escaping from their hands, withdrew from them.
And behold, a leper coming to him, says: "Teacher Jesus, while traveling with lepers and eating together with them in the inn, I myself also became a leper.* If therefore you will, I am clean."
And the Lord said to him: "I will, be clean."
And immediately the leprosy left him. And Jesus said to him: "Go show yourself to the priests and offer concerning the cleansing as Moses commanded and sin no more [...]"
------------
* (Schmidt:) You look for the lepers and were eating with publicans. Have mercy, I am like them.
The original reconstruction is factually impossible (traveling with lepers), therefore this new one.

Fragment 2 Recto
Coming to him, they tested him in an exacting way, saying: "Teacher Jesus, we know that you have come from God, for what you do testifies beyond all the prophets. Therefore tell us, is it lawful to pay to kings the things which benefit their rule? Shall we pay them or not?"
But Jesus, perceiving their purpose and becoming indignant said to them: "Why do you call me teacher with your mouth, not doing what I say? Well did Isaiah* prophesy concerning you, saying: 'This people honor me with their lips, but their heart is far from me. And in vain they worship me, teaching as their doctrines the precepts of men...'"
----
* Jes 29:13 (NRS): The Lord said:
"Because these people draw near with their mouths and honor me with their lips, while their hearts are far from me, and their worship of me is a human commandment learned by rote, ..."

Though the fragment cannot be reconstructed sufficiently, the meaning can be found:
A small seed in the ground is hidden and invisible. How does its abundance become immeasurable?
(By growing and bringing fruit.)
To clarify this, Jesus performs a miracle: He walks up to the river Jordan and with the water he gives rise to a spontaneous ripening of fruit. (much, for joy!)Possible parallel from Ezekiel 17:5-8:
17:5 Then he took a seed from the land, placed it in fertile soil; a plant by abundant waters, he set it like a willow twig. 6 It sprouted and became a vine spreading out, but low; its branches turned toward him, its roots remained where it stood. So it became a vine; it brought forth branches, put forth foliage. [...] 8 it was transplanted to good soil by abundant waters, so that it might produce branches and bear fruit and become a noble vine.

Willker does not provide a translation of the very fragmentary fragment 3 - but from the few characters it seems to follow that a parallel text to John 10:30-9 had been written down.


In an email, a colleague replied to this post:

Dear Markus, I read your recent post on Papyrus Egerton2 with its fascinating observations. I enclose an early thesis done by a Japanese scholar in Germany. Helmut Koester depended on it heavily in his treatment of the papyrus which led him to believe that it is independent from the known synoptic Gospels. it's primitive character though could support your idea that this could be Marcion's. However, a question came to my mind when I read it for the first time; in the saying:


Coming to him, they tested him in an exacting way, saying: "Teacher Jesus, we know that you have come from God, for what you do testifies beyond all the prophets. Therefore tell us, is it lawful to pay to kings the things which benefit their rule? Shall we pay them or not?"

I noticed that the author strips the saying of its narrative character in the Synoptic tradition (Jesus standing before the public while the Pharisees and Herodians try to entrap him by asking him whether to render the taxes to the Caesar). The story in the synoptic tradition has specific characters (Caesar, Pharisees and Herodians) and a plot that fits perfectly in the controversies of tax-paying and the Temple in Judaea.  in Papyrus Egerton2 Caesar is rendered to "kings..." no mention of the Pharisees and Herodians (unless they were mentioned before "Coming to him" in a lost fragment).  The saying becomes an Apophthegmata leading to a timeless Wisdom saying (what to do with the political authority.. whatever it is "kingS")
This makes me question why would the Egerton2 story would be presumed earlier while a tendency to strip the saying of its Sitz im Leben could be inferred?

Here my answer to my colleague:

You have picked the right text - which, as you will see, will support the hypothesis that P. Egerton 2 is related to Marcion and, in this instance, a more truthful witness to Marcion than to the Synoptics. While Luke 20:20 is not attested for (hence, we don't know whether Marcion referred to the procurator), it is very interesting that Tertullian, giving us in Adv. Marc. IV 19.7 the information that 'that question about tribute money' he read in Marcion's Gospel and then quotes: 'And there came to him Pharisees, testing him'. Already Jason D. BeDuhn in his new book on The First New Testament. Marcion's Scriptural Canon (Salem, 2013), 180 notes that 'this wording is not found in any witness to Loke or any of the Synoptic parallels', and then adds: 'but cf. Papyrus Egerton 2: "And they, coming to test him, said ..."' Whether or not Luke 20:20 was missing, in Marcion we seem to have a reference to the Pharisees, not the Herodians. So, in Marcion, the saying has a Sitz im Leben, even if it is not as explicit as in the Synoptic tradition (which has the tendency to elaborate on historical details to make their text sound older and more historical than the one by Marcion), while Egerton2 has, indeed stripped the saying off. If you follow my argument - then Marcion seem to have been earlier than Egerton2 (had the Synoptics copied from Egerton2 or from an earlier tradition, Watson's hypothetical Sayings Collection, why would they not have copied the ending of the leper story by Egerton2, but broke off and went their own ways, as soon as Marcion's text had come to an end? If however, Egerton2 is relying on Marcion, the textual parallel between Marcion's Gospel and Egerton2 is explained and the wisdom character of the Apophthegma in Egerton2. As we don't have Marcion's wording of par. Luke 20:21-3, but only Tertullian's witness for par. Luke 20:24-5 Egerton2 may be closer to Marcion than the Synoptics, when Egerton2 states that Jesus has come from God and what he does testifies beyond all the prophets. Both, the coming from God and Jesus' action as surpassing the prophets sound Marcionite.
Posted by Professor Markus Vinzent at 09:26 1 comment:

Review by Günther Röhser on my Christ's Resurrection in Early Christianity

Professor Gunther Röhser (New Testament scholar in the protestant Faculty of Bonn University) has published a concise review of my earlier book on Christ's Resurrection in Early Christianity in which he states: 'this book deserves unreserved admiration and agreement not only for its overall innovative courage, but also especially for its methodological approach, its question and the many results and detailed observations.' It is also nice to read that he adds the hope that his NT colleagues would draw the consequences from their patristic colleague 'and come to a re-judgement of the Easter tradition in early Christianity' (my trans.). The review is published Theologische Revue 109 (2013): 287-9.
Posted by Professor Markus Vinzent at 08:26 No comments: