In a previous blog, 4 years ago, I gathered medical reports about forms of diet that recognised medical studies have suggested to have an impact on the survival rate and length of Ovarian Cancer patients. Having done some further research on this topic, I am not suggesting to reject or even replace standard medical treatments, as some do, although elements of what, for example, cancer survivors like journalist and media entrepreneur Evita Ramparte live on are certainly reflective of medical studies (emphasising fresh, organic fruit and vegetables, less red meat etc.). While a positive attitude, not to focus on the cancer, but rather on the rebalancing of one's own life seems vital, one of the important suggestions which seem shared by medical studies is the impact of sports.

In an important study and report on ‘nutrition during and after Cancer therapy’, Stephanie Barrera and Wendy Demark-Wahnefried published in Oncology (Williston Park) 23 (2009 Feb) (2 Suppl): 15–21, found out that ‘diet and nutritional factors play a large role in influencing both the quality and quantity of life after the diagnosis of cancer. The oncology nurse is well-positioned to: 1) oversee that the nutritional needs of patients who are newly-diagnosed, undergoing active treatment, or those with advanced disease are met; 2) facilitate referrals of patients with more intensive nutritional needs to registered dietitians; and 3) promote the importance of weight management and a healthful plant-based diet, low in saturated fat and simple sugars, and high in fruits and vegetables and unrefined whole grains, to patients who are likely to join the ranks of ever-expanding population of cancer survivors who now constitute roughly 4% of the U.S. population and who number over 11 million’. In more detail, they show that ‘Current guidelines advocate a modest rate of weight loss (no more than two pounds per week) during the time of treatment among patients who are overweight or obese, as long as it meets with oncologist approval. Guidelines established for weight management in the general population should be applied to cancer survivors, and should include not only caloric restriction and increased energy expenditure through exercise, but also behavior therapy. While modest rates of weight loss can be achieved by portion control and by substituting low-energy density foods (e.g., water-rich vegetables, fruits, whole grains, and broth-based soups) for foods that are higher in calories, more structured and intensive programs that include exercise and promote energy deficits of up to 1,000 calories/day may yield better results. Previous studies have found exercise to be a strong predictor of weight loss among cancer survivors. Accumulating evidence also suggests that physical activity may independently affect the course of colorectal and breast cancer, and also affects the risk of secondary cancers at each of these sites, as well as for endometrial cancers.’

One note on Green tea during a therapy with Bortezomib: A study of 2009 found out that patients during this therapy should not dring Green tea because its content (EGCG) could counter-act the therapy - but they can start drinking Green tea again, once the therapy has ended (see N. Quirin, p. 6 below).

There is a variety of Products which are listed amongst those who either help spreading tumors or metastases, others work against inflammation, others stimulate bacteria to support the immun system or help deactivate unhelpful content of other food.
Amongst these are:


- Elisa V. Bandera, Lawrence H. Kushi and Lorna Rodriguez-Rodriguez published another interesting article on ‘Nutritional Factors in Ovarian Cancer Survival’ in the journal Nutrition and Cancer 61/5 (2009): 580-586. First they show that relatively little research has been done in this area and they mention the following studies:


The main focus, then of this article is on the BMI (Body Mass Index) with its evaluation of the impact of obesity on stage of disease at diagnosis, as well as its effect on survival: ‘Survival analyses need to include important covariates, such as age, stage, grade, histologic type, presence of ascites, and treatment information. Of relevance is not just weight or BMI prediagnosis or at the time of diagnosis but also during and after treatment’. Again, there are only a limited number of studies to have dealt with this issue that filtered into the above mentioned guidelines. 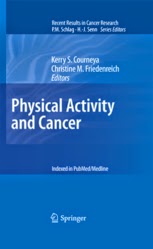 
The result of their study was that with 27 patients enrolled there was a ‘moderate to strenuous physical activity’ which ‘was correlated with higher physical well-being during chemotherapy’. And they conclude that ‘Lifestyle counseling during adjuvant chemotherapy for ovarian cancer is feasible and may improve physical activity and diet quality’. To learn more, they suggest further trials.

Posted by Professor Markus Vinzent at 13:29 No comments: